Inside the Mind of Stephen King

There have been thousands of articles and videos that offer Stephen King writing tips. King even wrote an excellent book called, On Writing, that reveals them all. How is this different? We look inside the mind of Stephen King.

Back in the day in graduate school, I was required to read a book called, Young Man Luther: A Study in Psychoanalysis and History written by Harvard psychologist Erik Erikson.

Erickson used the life and writing of Martin Luther to psychoanalyze him hundreds of years after his death. We can learn much from people when we do that, and assembling insight from a writer like Stephen King is not different.

It just so happens I’m semi-qualified to talk about how King’s psychological development influenced his writing methods, and that’s the aspect I’m sharing here. That’s coming up right now!

Stephen King did not pop up like a mushroom in a dark place. He had a history that shaped his thinking and the words he put on the page.

His father abandoned the family, which included his mother and brother David, when King was two years old. After that, they bounced around the eastern US, living off the generosity of relatives and his mother’s meager earnings. They arrived again in Maine when King was 11. He lived in the house where his mother cared for her dying parents, and he observed their decline and death firsthand.

He went out to play with a friend one day and came back in a daze. His mother couldn’t get him to respond. It was later revealed that the friend had been hit and killed by a train. King saw it happen, even though he says he has no conscious memory of the horrible death of his friend.

All these things— and more—affected his psychological formation. The human psyche includes the soul, mind, and spirit, and that is the well-spring of all we write.

The writing tip? External stimuli may trigger a book, story or blog post, but we must all go to the well which is inside us, in our minds, where mysterious combinations of ideas and emotions take place.

Horror Writing Emerged from Within Him

Young King had a lot of IMG monsters in his personal life. He never knew what monsters might jump out at him. Children are not born with coping skills, and we all develop them in different ways. 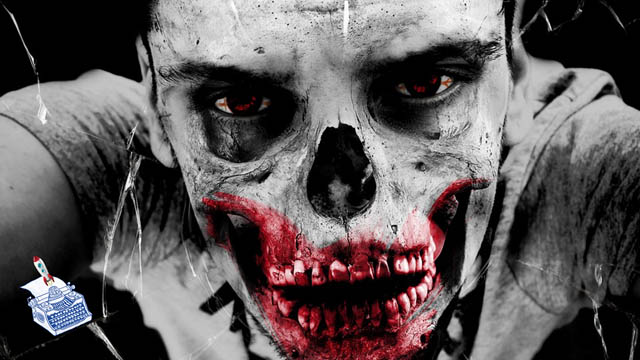 King dealt with them by writing supernatural fiction. He has strayed into other genres, but most people would probably say he is America’s greatest horror writer.

He has published over 60 novels and reams of short stories. Many of his works have become major motion pictures, like “Carrie,” “The Shining,” “Misery,” “Stand by Me,” “The Shawshank Redemption,” and “The Green Mile” to name a few.

From a psychological perspective, I think we need to acknowledge that all the terrors we see in the books were inside the young Stephen King. As an adult, he wrote stories to resolve his inner conflict.

Sure, some stories may have been triggered by newspaper articles or other sources he read. And he has cited Richard Matheson, H. P. Lovecraft, and Arthur Machen as influences, but why was he drawn to them?

It’s interesting to me that King often deflects the inspiration for some of his work. He says they come as riffs on stories from other writers he admires. But the fact is, more than a few are based on some of his traumatic childhood feelings and experiences.

I would say his life experiences gave him a macabre turn of mind that touched something deep in his psyche.

At the core, King experienced instinctive fear and he was compelled to confront and resolve that fear. Only through his writing could be put his fears to rest.

So, what’s the writing tip? It’s that you don’t need to live with your fears, real or imagined. We have the power as humans to face and overcome fear in our own constructive way.

And there is another King writing tip here. That is, our fears may be the source of our best writing. We feel those fears on a visceral level, and the psychology of writing from that place is pure gold. Explore and exploit your own fears.

King Has an Addictive Personality

King admits to his addictions. After he got some big income from his writing, he got heavily into dope and booze. He said he would write sober doing the day, then do his editing when he was stoned out at night. 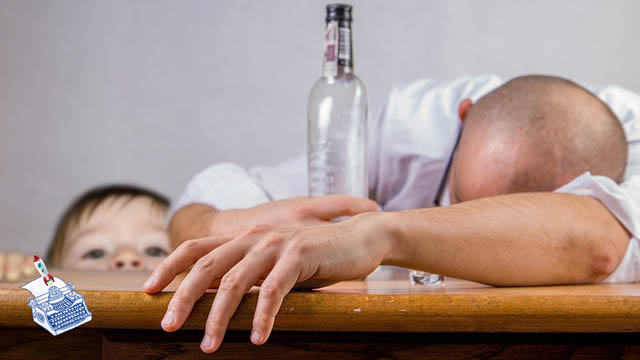 Psychologically speaking, that could have been a fear response rooted in his deprived childhood, and his need to scramble for survival before his first book was accepted.  He was getting money for doing what he loved and he was afraid it might all dry up.

King’s wife Tabitha found him face down in his own barf at his desk too many mornings, and she finally called for a life-saving intervention.

The tip for you and me is that the possibility of addictions exists for us all.

If we don’t understand the writing process, or are disorganized, or have other unresolved doubts or fears, then stress will come.

We start making lame excuses for not writing, like having so-called writer’s block. Then we start thinking that alcohol or drugs will expand our consciousness.

That’s not true of course, at least not for the long haul. Many talented writers have ended up overdosing on drugs or blowing out their brains in an alcoholic stupor.

The lesson we learn from King is that you can channel your addiction. He channeled his addiction into writing. Writing became its own high.

King said, “Write for the joy of it and you can do it forever.”

King has Obsessive-Compulsive traits. No, I am not saying he had obsessive-compulsive disorder. I’m not qualified to diagnose that. Remember, I’m a writer, not a licensed therapist, so my observations are not any kind of diagnosis; my focus is on how our minds empower our writing.

But some of his behaviors seem borderline, and they are worth noting. We can learn from them. https://www.verywellmind.com/ocd-and-personality-2510482

One example: behavioral science says something called harm avoidance is a healthy personality trait. However, if someone is deep IMG into harm avoidance, and that can be something that pushes people in an obsessive-compulsive modality.

Almost all King’s stories are about harm and harm avoidance.

Drug use is also linked in studies to obsessive-compulsive behavior. From the story of his life, it seems King is a prime candidate.

King appears to know obsessive-compulsive traits from the inside out. We see it in much of his writing. Just a few examples. Annie Wilkes in Misery clearly suffers from the malady.

Some have speculated that the clown in IT is the personification of obsessive-compulsive disorder.

His short fiction, N., which is included in his 2008 release of Just After Sunset, is about an obsessive-compulsive accountant, and how the disorder affects others.

In a 2014 Rolling Stone interview, Andy Greene asked King if writing was an addiction.   King said:

“Yeah. Sure. I love it. And it’s one of the few things where I do it less now and get as much out of it. Usually with dope and booze, you do it more and get less out of it as time goes by. It’s still really good, but it’s addictive, obsessive-compulsive behavior.”

That’s the crunch point. King has been able to turn an undesirable trait into something good.

The writing tip from this is that we should be obsessive about our writing.  We should be compulsive about seeking excellence (not perfectionism) in our own writing.

The intruding thoughts we have empower us, but only when we channel them in positive ways.

Do you have obsessive-compulsive traits? The only question is how you can harness them to help you become a more proficient, more productive writer.

King Has a Sense of Calling

King had a sense of calling. He could have been successful at many things. He is smart, imaginative, and not afraid of work. 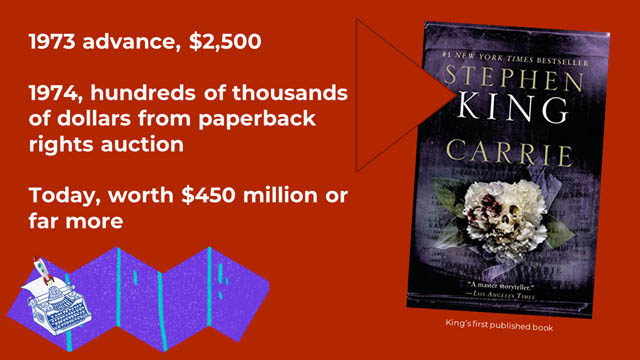 He initially supported his young family as a high school teacher, and he was good at teaching. They asked him to take ever-increasing responsibility. He later taught writing at the University of Maine for a while.

Even though he enjoyed teaching, he saw it as a threat to his calling as a writer. His own class prep time, correcting papers later, and supervising extra-curricular student activities smothered him he said. He craved time to write.

King stayed true to his calling. He wrote in every spare moment. Finally, in 1973 he got a $2,500 advance from Doubleday Publishers for his book Carrie.  That’s $15,000 worth of buying power in 2020 dollars when you account for inflation. That money made King free.

He was freer yet the next year when Doubleday auctioned off the paperback rights and he got a check for several hundred thousand dollars in a lump sum.

Today, he has a net worth of about $450 million, perhaps far more.

The writing tip? It comes from King’s psyche. He needed money so his young family could survive. But his sense of calling was to deal with all the monsters in the closet of his mind. He met his psychological needs through writing.

What is the overarching lesson writers can learn from Stephen King? I’d say that it is two-fold.

First, don’t let your upbringing, fears, or the adversity you experience keep you down. Your life—the good, bad, and the ugly—may seem like straw to you, but it’s your job as a writer to spin it into gold.

Writing does not take place when you put words on the page. It occurs an instant before that as you formulate the sentence in your mind.

And truth be known, that sentence was formulated long before that in your psyche. Every experience, every relationship, every idea, is part of every sentence you write.