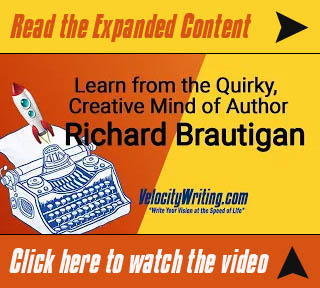 Some might say he is too simplistic or too ethereal, but he sure could sure spin a story. I read his novella, In Watermelon Sugar every year just to keep my surrealistic sensibilities alive.

He came right at the end of the Beat Generation writers and is he’s not always included among them. But writers can learn a few things about writing from Richard Brautigan.

Who Was Richard Brautigan?

Richard Brautigan was a San Francisco poet, short story writer, and novelist who reached his peak in the late 1960s, even though he did some interesting work after that.

Brautigan had a troubled childhood, to say the least, and suffered from mental maladies his entire life. There’s little doubt that his depression finally overwhelmed him in 1984. That’s when he ended his own life at age 49 in Bolinas, California, which is across the Golden Gate Bridge from San Francisco.

A friend of his, Thomas McGuane said, “He was a gentle, troubled, deeply odd guy.”

Yet, his wry sense of humor and unique view of the world brought him fame.

Besides his many books, he had 23 pieces published in Rolling Stone magazine. He was Poet-in-Residence at the California Institute of Technology for a term. So, he had some traction.

He was a clever writer who worked metaphors like a magician.  Near the end of his life, he was more popular in Europe and Japan than he was in the United States. Many of his books are now part of compilations, so in some cases different titles are available with one purchase.

His most well-known novel might be A Confederate General from Big Sur. But his less traditional book, Trout Fishing in America sold over 4 million copies.

If you want to read a novel that will flip your mind like a pancake, read In Watermelon Sugar. It’s about a love affair. It’s about a rumble with evil people. It’s about tigers who eat a child’s parents, then the tigers help the child with his math homework.

He wrote several other notable novels, including the hilarious Willard and His Bowling Trophies, and his gothic western, The Hawkline Monster.

His last novel is among my favorites. It’s called, So the Wind Won’t Blow It All Away. It’s a fictionalized reflection on his troubled childhood in the Pacific Northwest. It’s about the consequences of decisions we make early in life and how they continue to affect us.

In his case, the life-changing choice was a simple one. Should he spend his last dollar to buy a hamburger, or buy some bullets to hunt. He made the wrong choice.

If you don’t know about Brautigan but are attracted to postmodern surrealism, satire, genius, and whimsy, then you’re likely to enjoy his writings. He created some wonderful dream-like scenes and symbolic images, along with the unexpected, illogical juxtapositions that are hallmarks of literary surrealism.

By the way, I keep mentioning surrealism. Most think of it in terms of paintings, but the concept gelled in a book by poet André Bre[n]ton in 1924. It was an outgrowth of a post-World War 1 movement known as Dadaism. Surrealism is a way to reunite the conscious and unconscious –and join them to the rational world.

I’m enamored with this school of writing and you can read my own novel, Jet Pink, and my poetry collection Anti-Poems, which are part of this genre.

You may wish to pause this video to read the stanza from Breton’s surrealistic poem.

What can writers learn from Richard Brautigan?  At least three things.

First, as a writer, it’s your choice if you let your past dictate your future in a negative way. Brautigan had a deprived, abusive childhood. He had mental health issues as a young adult. Yet, he channeled that into a creative career. He transformed adversity into art.

Brautigan took the absurdity of life head-on. He saw pathos as quixotic eccentricity, not dreadfulness.

On the other hand, today we have thousands of people writing about their angst. It is therapeutic for them, and that’s good. But the bad thing is they are hell-bent on publishing these books. These authors seem obsessed with vindication, even though they often mask these melancholy self-revelations with the suggestion they are trying to help others.

Brautigan was beyond that. He transformed the tragedy of his life into something fresh and creative. No “woe is me” for him. He was able to spin stories that transform the minds of readers in positive ways.

The thing we learn is that there are many ways to tell a story. Brautigan demonstrates that writers can accomplish more by using creativity rather than unadorned realism.

A Childlike Quality is Positive

Second, Richard Brautigan had a certain childlike quality about him, and I see that was a virtuous thing. But, he received criticism for it.

Lawrence Ferlinghetti was a well-known Beat Poet of that era and legendary co-founder of City Lights Bookstore and Publishers in San Francisco.  Ferlinghetti published Allen Ginsberg’s Howl and successfully demolished the Cancel Culture of his time. Ferlinghetti won a Supreme Court decision that favored freedom of expression. He was one of the good guys.

But he didn’t understand Ricard Brautigan. In a Vanity Fair magazine interview, Ferlinghetti said, “As an editor I was always waiting for Richard to grow up as a writer. It seems to me he was essentially a naï[ee]f, and I don’t think he cultivated that childishness, I think it came naturally.”

I like Ferlinghetti, but I think that was a terrible thing for him to say about Brautigan.

Ferlinghetti broke the Picasso precept. Picasso said, “Every child is an artist. The problem is to remain an artist when they grow up.”

So, Ferlinghetti missed the boat in his criticism of Brautigan in my opinion.  And that’s something that Richard Brautigan can teach all writers.

That is, we must all cultivate our sense of childlike wonder. That includes things like being curious, having an uninhibited imagination, and not being intimidated by the naysayers in our lives.

Purity of heart can be a great thing. A sense of innocence and wonder is a prize we should all cherish.

What’s the third thing we can learn from Richard Brautigan? IMG Don’t be afraid to experiment.

His sense of curiosity and wonder led him to experiment with all the major literary genres. He was a poet, wrote short stories, novellas, and novels.

Among other things, he wrote mysteries and westerns.

His unusual perspective on reality, his magical turns of phrase, and his wry sense of humor enabled him to create some remarkable work.

The lesson we can all learn is to be more experimental in our writing. We get fixated on perfection, IMG but perfection is an illusion. We may think you have written the perfect sentence or the perfect book, but people will find the flaws we missed and will pick it apart.

So, maybe you should allow yourself to take a more adventurous approach. Free your mind and take some risks. Don’t be afraid to view your plot and characters from an oblique angle.

That’s what Richard Brautigan did.