Yes, there is a case against outsourcing to offshore content writers. They may work cheap, but there is usually a communication disconnect. That can have devastating consequences on your profits.  Stop and think before you hire any offshore person to write blog content for you.

Content buyers usually outsource content because it’s cheap, not because it’s effective. There are exceptions to this, of course, Many content buyers will claim their foreign blog content writer is exceptional, but that is seldom the case. They may rave about the writer, but they rarely measure results with testing

Offshore content writers may have learned English as a second language, for example, but have never lived in the culture for an extended time, if at all, so they do not comprehend the subtleties of idiomatic English.  The money is in understanding the idiomatic elements of any language because that is what conveys emotion, which is the basis of all sales. The dynamics of persuasion is different in each culture.

Xenophobia is Not the Issue

What do I mean by “offshore content writer”? It merely denotes anyone who writes informative or persuasive content for someone in a different culture. If you are selling your product or service in India, Pakistan, the Philippines, or another country, then you need to use a writer from each particular country. However, if your market is in North America or Europe, then you want to use a writer from there.

“Offshore” is a polite euphemism for “foreign.”  In North America, we would say that people in the India sub-continent are “offshore,” for example.  This is not a wholesale indictment against offshore content writers,  but insight about why they are unlikely to be your best choice.

The reason you don’t want to use offshore writers for website content has nothing to do with xenophobia. It is all about language and about sales psychology. 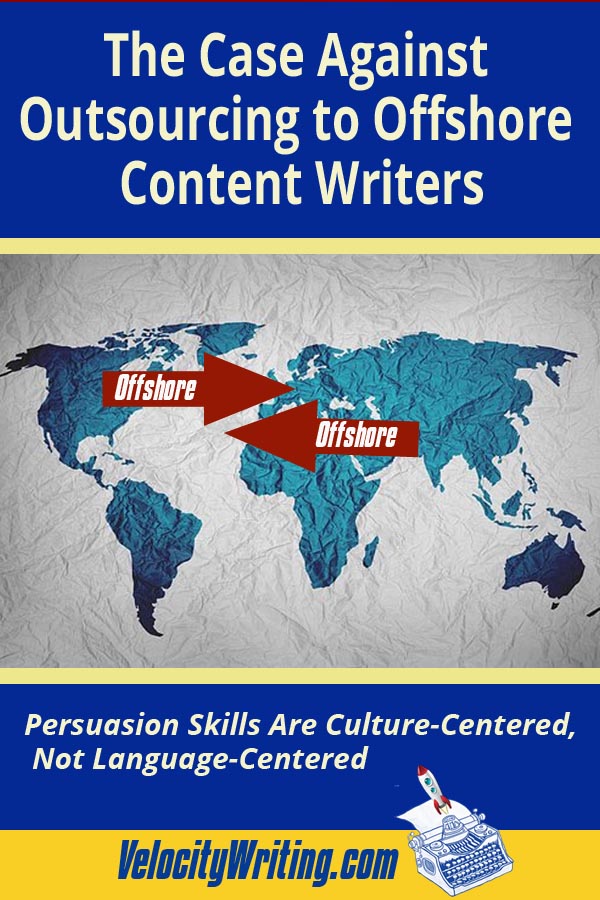 You see, you have to live in a culture for an extended time to understand the nuance of the language and to know what motivates people in the culture to buy products and services. You can’t learn that in school, you need to be immersed in the culture, and no one does that better than a native.

The language you write in should be your first language, whatever it may be. That language is the repository of your primary understanding of yourself, others, and the world.

The idea that you need American writers for an American audience (for example) is not whimsy. It is based on academic research in the field known as cross-cultural communication.

According to an international study:

The knowledge of target language’s culture is as important as its grammar or vocabulary. Perhaps more to the point, a lack of cross-cultural awareness can be a severe hindrance in the understanding of a message which is linguistically accurate or comprehensible.

An Example of Cross-Cultural Communication Failure

Those who have seen old World War II movies are familiar with this stereotypical scene. A Jeep full of unsmiling blond soldiers arrives at the American checkpoint. Only the driver speaks. Their uniforms look okay, but the old sergeant is a bit suspicious and thinks they may be Nazi infiltrators.

They can’t answer. The men in the Jeep are taken prisoner.

Most Americans at that time automatically knew it the New York Yankees beat the Cincinnati Reds in 1939, but foreigners were not likely to know that. Nuance is everything when it comes to communicating ideas, and offshore writers miss that.

Studying English or watching Hollywood movies won’t help. It requires an immersive experience to know the subtleties of language and culture.

Think about it. If I, as an American, studied Hindi (the dominant language of India) in university and saw many Bollywood movies, would I be qualified to write content to persuade Indian people to hit the buy button on your Indian site? Of course not. And offshore writers cannot effectively reach minds outside their culture either.  That is the case against outsourcing to offshore content writers.

Two Outsourcing Elephants in the Room

Many online marketers will tell you that outsourcing your writing to foreign lands is a good thing to do. Most seem to have some “special” overseas person they rely upon. There are two huge problems with this.

The first is that most marketers don’t know good writing when they see it. That’s why Google had to institute the Panda/Penguin/Hummingbird algorithm changes back in 2014 and keep updating those algorithm changes today.

At the start, there were probably millions of pages that ranked high in search results because of the keywords they contained, but the actual content was so poorly written that it offered no value to readers. Google banished those pages and continues to do that today.

The second reason many online marketers suggest using offshore content providers is that the content is cheap. They never seem to praise such content because it is effective, but capitalize on the fact that overseas workers are willing to work for a subsistence wage. The goal is to influence people, and content created outside the culture of readers will miss the mark.

Some content buyers rationalize the exploitation of these workers, but how would you feel if you knew someone 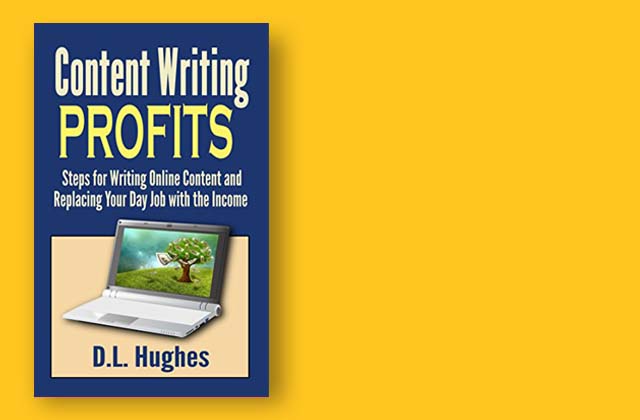 A contributor to a web marketing forum put outsourcing to overseas writers in perspective. He said, “The old adage ‘You get what you pay for’ comes into play here. Not saying that the articles are the worst in the world, but they aren’t going to be the quality of a high-end article either. Hey, for $3.75 for a 500-word [custom] article, what would you expect?”

The sad thing is that too many online marketers expect content to be cheap, and effectiveness has nothing to do with it.

Worse, these same people think they can pay the same pennies-per-word to North American or European writers as they pay third-world writers. However, the per capita income was $1,670 in India (converted to dollars 2019), and $31,370 in the US, so online marketers tend to exploit both groups. They cheat people in India and the US by paying the lowest wage regardless of their respective local economy. That is exploitation at it’s worst. Content buyers would get better results if they hired and paid writers honorably within the culture where the content is primarily consumed.

What Do You Want to Achieve?

That is the case against outsourcing to offshore content writers. If you are intent on making a winning presentation to a North American audience, the blog articles and books written by overseas vendors will complicate your life. If your site is in another land, then you want to hire the writers within your geographical and cultural boundaries.

The simple reality is that content buyers need content that speaks to the culture of the person reading it. That means using idiomatic English in North America, for example, and the cultural sales psychology that is part of that.

There is a power beyond the words themselves. Content writers must harness that power to be successful. They can only do that effectively within the confines of their own culture. Content buyers should buy content from people in their target culture and pay them a reasonable fee for their work.