Writer Curiosity and How to Free It 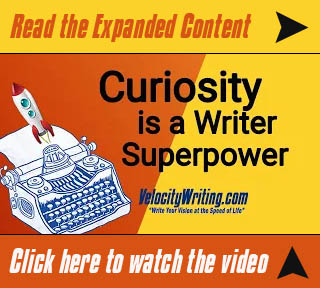 Did you know that curiosity was not always valued? The old saying is, “Curiosity killed the cat.” I hear firemen say the same thing about cats stuck in trees and chimneys.

It originally meant, “Don’t be overly inquisitive.” Doom awaited nosy people, according to this saying.

In the information age, curiosity is a great gift, particularly for a writer.  Your curiosity can make you a better writer in many ways.

Are you curious enough to find out more? That’s coming up in 5 seconds.

In This Article hide
1 What is Curiosity?
2 Curiosity is a Superpower
2.1 Science Supports Swartz
2.2 Curious Writers are Always in Scan Mode
2.3 Curiosity Doesn’t Come and Go
3 How to Develop Curiosity
3.1 Be More Childlike
3.2 Read Widely
3.3 Ask “Why?” More Often
4 Cat Lovers Unite

What is Curiosity? On the surface, it is simply “the desire to know.”

I like this definition better: “Curiosity is the gap between what you know and what you desire to know.”

Albert Einstein nailed the concept. He said: “The important thing is not to stop questioning. Curiosity has its own reason for existence.”

Let me tell you about the curiosity of Sir John Harrington. He was a poet. Queen Elizabeth I banished him from the court in 1584 because so much of his poetry was ribald. You know, risqué verse about body parts, sexual escapades, and words that rhymed with Nantucket.

So, John Harrington was exiled by the Queen for being naughty. Where did he go? The English town of Bath. And his curiosity went into overdrive.

He invented a device which was a bedpan filled with water, with a release valve at the bottom. The user pressed a lever, and human waste went down a pipe, and the water was replaced from a container.

So, the poet who was preoccupied with private parts was curious enough to invent the first toilet.

Queen Elizabeth I loved it, but most people stuck with their bedpan. It wasn’t until 1848, when others had improved the toilet and underground sewers were built, that the British enacted a Public Health Act, and toilets became common in homes.

So, a curious poet gave us all a throne in our own home. Let’s hear it for writers!

Curiosity is a Superpower

I said curiosity was a superpower. I think that people who want to write have it. Curiosity is the drive to learn and explain things. It applies equally to fiction and nonfiction writers.

Science seems to back that up. Researchers Penney and McCann (1964) found no relationship between IQ and curiosity. Later research confirmed similar results.

Curios people seem more intelligent, but actual IQ doesn’t come into play. That makes curiosity a superpower to my thinking.

The second thing that makes curiosity a superpower is that we are always scanning our environment. We are inquisitive about everything.

Superman had to change into his tights and cape to leap tall buildings in a single bound. But writers are perpetually curious. No special costumes are required.

Our ears are open in coffee shops for snippets of conversation we can use. We are paying attention to the mannerisms of people and how they dress and talk.

Yes, we have a kind of x-ray and vision and hyper-hearing to collect details to add substance to our writing.

I think the third part of the curiosity superpower is a persistence quality that most people don’t have. Curious writers always go the extra mile to follow up on what they read and saw, and to link the knowledge to what they already know and feel.

I was a little kid, I was always asking “why?” I dismantled things like clocks to see how they worked.

Later, at Princeton, I hung out in the third sub-level of Firestone Library, looking for the books mentioned in the footnotes in more recent books I was reading. Pre-internet days. My curiosity compelled me to find and read the original source.

The internet is a machine designed to satisfy the curiosity of even the most radically inquisitive person.

How to Develop Curiosity

If you are not sufficiently curious now, you need to develop your curiosity. Here are three ways you can do that:

Pablo Picasso said, “Every child is an artist. The problem is how to remain an artist once we grow up.”

The same idea applies to curiosity. Children have an insatiable curiosity. They are always exploring, always testing the limits, always questioning. We give them books, toys, electronic devices because they are curiosity tools. We have them go to school and take them places to feed their curiosity.

You cannot be an exceptional writer if you are operating out of your own adult brain. You need to take your mind and body on adventures and regain your childlike sense of wonder. Jump a ramp on your bike, smell the flower, eat a bug. That’s how childhood curiosity works.

George Loewenstein, a professor in the field of social psychology at Carnegie Mellon University, says, “Curiosity has been consistently recognized as a critical motive that influences human behavior in both positive and negative ways at all stages of the life cycle. It has been identified as a driving force in child development and as one of the most important spurs to educational attainment.”

He stopped at educational attainment in this quote. But I read his research paper, and I think he’d say creative attainment as well.

You must read widely. But here’s the trick to expand your curiosity. Don’t always follow your interests. Don’t get in a rut in your reading. As an Amazon Prime member, I have free access to digital editions of magazines. I use them to explore topics outside my usual sphere of interest.

I’ve dipped into articles in Popular Mechanics, Better Homes and Gardens, and Vanity Fair most recently. Not topics of primary interest to me. But I’m curious enough to see what others are thinking, and you can be curious like that too.

I’ve always said that most people have the wrong idea about both money and reading. The real value of money is that you can use it to compress time.

Sure, you can walk coast to coast in the US in four months if you’re broke. But if you have the money for an airplane ticket, you can compress that down to four hours.

The same is true of reading. Books are filled with experience. You can only live one short life. By reading, you live vicariously through others and gain their life knowledge. You can compress expertise and benefit from a hundred people’s experience if you read a hundred books.

Most of us are consuming lots of content from the internet, radio, TV, podcasts, and other sources. We are like sponges in many cases and don’t question anything.

Sadly, our society has become so polarized that we only react to things we disagree with, which doesn’t expand anyone’s knowledge.

What we need to do is question what we see or hear. We need curiosity to kick in, do some research, and get differing opinions. That is how we satisfy curiosity. And that’s how we form new, exciting ideas that are worth sharing in our writing.

Cat lovers didn’t like the saying, “Curiosity killed the cat.” They thought it was pejorative to the poor little “puddy tats” they loved. They changed the expression so cats would not be stigmatized.

The revised quote that first appeared in 1912? It was “Curiosity killed the cat, but satisfaction brought it back.” So, both cats and curiosity were vindicated.

However, I don’t think any connection with cats is necessary at all. Curiosity is its own reward. For writers, it is a superpower that will make us all more creative and stimulating. Feed your curiosity and free your writing superpowers.