Abolish Your Agony and Write for Joy 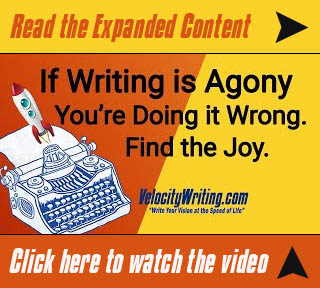 As regulars here know, I have been mentoring writers one-on-one for decades. Also, this site, VelocityWriting.com, now online for 15 years, is designed to train and encourage writers.

And in all the years, I have discovered that most aspiring writers are full of excuses for not writing. That’s baffling, I know.

One of the major excuses is that writing is pure anguish. And they quote famous authors to support the horrible pain they’re supposed to experience.

I don’t see it this way. Writing can be pure joy, and I’ll explain why right now.

This past week I had a video comment on my YouTube channel from a viewer that was about seven paragraphs long.

It was mostly a rant focusing on the idea that I am always talking about techniques that encourage writing success. I was of no help because he couldn’t finish a page.

People have an urge to write, but they fail to sit down and actually put words on a page.

They start blaming others, as in the case of the YouTube commenter who accused me, or they adopt more global excuses. Lack of time. Writer’s block. Or the “terrible anguish of the writing process.”

This is important: If writing brings you anguish, then you are doing it wrong.

These people love to quote Nobel Prize winner in Literature, Ernest Hemingway, to support the anguish they say they feel.

Hemingway allegedly said, “There is nothing to writing. All you do is sit down at a typewriter and bleed.” There are variations of this quote attributed to Hemingway. Still, they are all used in the context of the alleged dreadfulness of writing.

But according to a trustworthy site I love, QuoteInvestigator.com, Hemingway never said that, so it’s bogus to use it as an excuse.

The fact is, the quote was first attributed to Hemingway in 1973, twelve years after Hemingway died.

The notion goes back to at least 1855 when Poet Thomas Campbell, who said words came to him drop-by-drop, but there was no indication by him they were drops of blood.

In the 1880s, German author Friedrich Nietzsche said, “Write with blood, and you will experience that blood is spirit.” But there is no anguish, no pain in that. He was talking about writing with passion.

Where did the saying attributed to Hemingway after his death come from in modern times? According to QuoteInvestigator.com, it came from famed author Paul Gallico in 1946.

In “Confessions of a Story Writer,” Gallico wrote: “It is only when you open your veins and bleed onto the page a little that you establish contact with your reader.”

Again, there is no idea of writer agony nonsense here. He is speaking about how to establish an emotional connection with readers.

When did the quote attributed to Hemingway hit the mainstream of public consciousness? Probably from Red Smith, a syndicated newspaper sports columnist in 1949.

QuoteInvestigator says, “Red Smith was asked if turning out a daily column wasn’t quite a chore. “Why, no,” dead-panned Red. “You simply sit down at the typewriter, open your veins, and bleed.”

What is my point here? That many writers are looking for excuses not to write. They feed on a fake Hemingway quote like this one and share it as an alibi for their undisciplined mind and poor writing habits.

But there is joy in writing.

All of these writers were driven by joy.

I could go on about writers who wrote for the joy of it, but you get the idea.

Most of these people did not need the money after a while—and they weren’t masochists. They all wrote for the joy of it.

How can you get the joy I’m talking about here?

Joy Comes from Within

Joy comes from within. Here’s the first thing you must do to get the joy. Take a walk in a deserted place and ask yourself why you think you are a writer.

You got the idea you were a writer somewhere. But there is a disconnect if you are not writing or are continually making excuses about how hard it is.

Are you lying to yourself about being a writer? Maybe it’s hard for you because you fantasize about writing, but don’t have the motivation or skills.

Quick story. When I was just out of high school, I went to work in the construction industry. I grew up in that industry, and my family had made a pile of money building tract homes.

So, with grand thoughts of doing it on my own, I joined the Union, became an apprentice, and got my first job. It was installing rebar in foundation trenches for a commercial building in Riverside, California.

I lasted two days in the heat, dirt, and bleeding hands and sore muscles. What did I do? I quit, of course. My momma didn’t raise a dummy.

That’s why I want you to examine your motivation for writing.  You’ll always have anguish and never have joy if you are in a fantasy world about the nature of writing.

If you do not have STRONG reasons for wanting to write, I advise you to quit. Yes, I mean that.

Yes, I know that the Internet is filled with shallow encouragement for writers. “You can do, kid.” But if writing is any kind of torture to you—and you keep at it—then you may be suffering from NSSI, which is Nonsuicidal Self-Injury Disorder.

Based on my experience, I’d say many are attracted to writing because of the wives’ tales about writing and suffering. Such people are not writers at all and should quit.

Let me finish my quick story. After quitting carpentry as a kid, I went on to get a bachelor’s degree and two master’s degrees.  I traveled to over 30 countries as a journalist.  I’ve written 42 books so far and have helped thousands of writers achieve their writing goals.

But that’s not the end of the story. Something odd happened in my life, and I found myself in the building business for three years when I was in my 30s. In that period, I designed, developed, and constructed 41 single-family residences and apartment units.

Quitting is not forever. But sometimes it is, and that’s okay.

Examine your motive for writing. If your motivation does not go to your core, then quit now. Maybe you’ll want to try again in a few years. You’ll know it’s the right for you then because you won’t feel like you’re suffering.

Here are three quick tips to find joy in writing.

Joy Comes When You Outline Your Writing Project in Advance

Joy Comes When You Outline Your Writing Project in Advance. If you want to suffer, try writing off the top of your head. Yes, I know a few acclaimed writers say they do it, but a few of them also kill themselves. Don’t write without an outline, and don’t kill yourself.

Think about the last time you were lost. You were late for an appointment. You were low on gas. Your car air conditioning wasn’t working correctly. You found yourself in a bad neighborhood. You had to pee. Your anxiety levels were high.

Why did you suffer? Because you had no map to guide you. An outline is a map. An outline will relieve anxiety and add joy to your writing.

If you have no idea about the specific arc of your fiction or nonfiction book before you start, what makes you think it will come to you all of a sudden? You are inflicting heartbreak and pain on yourself if you think you cannot work without an outline.

Yes, of course, you can divert from your planned route if you wish, but you have no joy because you start with no plan at all.

Joy Comes When You Wait to Edit

Don’t Edit as You Write. If you want to kill the joy of writing, edit each paragraph or page as you write.

Some people say that editing every paragraph or page as you write is a writing technique. I say it’s a terrible habit. It may even be an affliction. It is an expression of perfectionism or narcissism, and both of those things will make you depressed and angry.

First drafts are always terrible. Accept that. Allow yourself to write a complete first draft with wild abandon and absolute joy. Don’t be critical of anything you have written until you get to the end.

Only killjoys write and edit in the same session.

Joy Comes When You Control Your Mind

Finally, to energize your writing with joy, you must understand that YOU control your own mind. Not your mom, not your spouse, not your friend, not your teacher, not even your own alter-ego.

As I said, if you have examined your soul and are not a dilatant, then your mind sends you the message that “Yeah, this is my purpose, I’m doing what I should be doing.”

No pain there. That’s a shot of pure joy.

When you control your mind, you manage your self-talk. You don’t demean and discourage yourself. Tell yourself the truth. You say, “That’s was not exactly what I meant to say, but I’ll fix it my second draft.”

If fact, you may even write a particularly good sentence or paragraph, and you are allowed to say to yourself, “Damn, I’m good!”

Joy comes when you take care of your mind.

Above all, be kind to yourself. Writing is hard work. Hard work brings strength, satisfaction, and joy.