Courage is Essential to Writing Success

Courage is the most important quality for any writer to have. That may seem strange to you, but let me explain how courage will revolutionize your writing life.

It Takes Courage to Start Writing

I don’t know of any field of human endeavor where people have so much self-doubt.

People want to write, but they have all sorts of excuses running through their mind.

It takes courage to overcome all those negative inner messages. But all successful writers must say the same thing—”I can do this. I’ll fake it until I make it.”

Part of the self-doubt comes from the naysayers. All writers seem to have a father, sibling, spouse, friend, or whoever, who says, “You’re wasting your time writing.”

That’s hard. You need to be brave in the face of inner self-doubt and outer discouragement.

You can be courageous by just writing. Click off the negative self-talk. Close the door on critics. Be brave and just write.

It Takes Courage to be Yourself

In the writing world, we have this thing called, “finding your voice.” 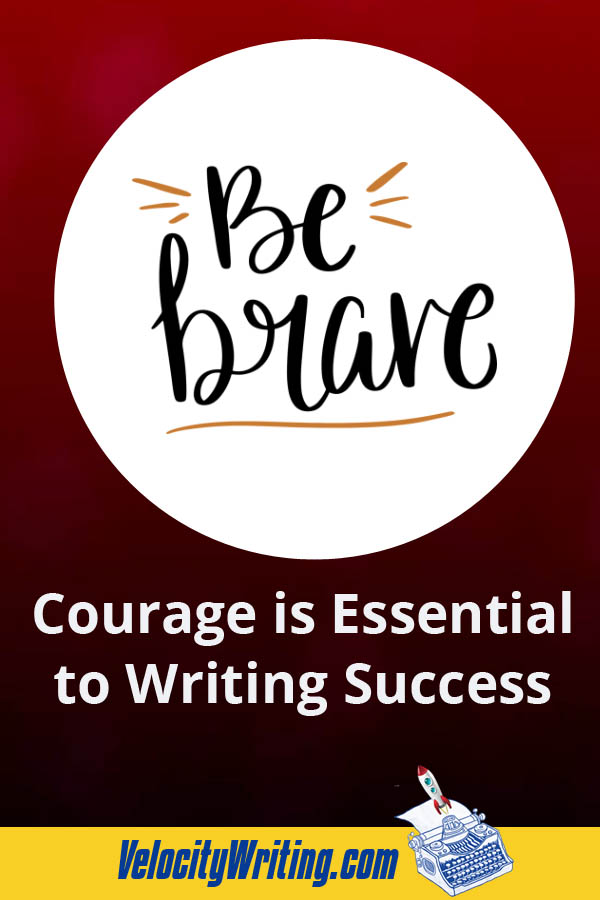 It’s confusing because there are conflicting definitions about what it means. The reality is, you don’t find confident maturity as a writer until you have found your voice.

Finding your voice is being comfortable in your own writing skin. You are not afraid to be vulnerable by willing to share the core of your being.

Writing is not writing about imaginary things. Even fantasy books are filled with creatures with real emotions that spring from human emotions.

You expect your readers to connect on that emotional level. If you’re a cardboard person, you’ll write in a cardboard way, fiction or nonfiction.

What am I saying here? You must be an authentic person to write—that’s your voice. Lay it all out on the line for your readers. That takes bravery.

You can be brave by letting your mask drop.

It Takes Courage to Release Your Book

Third, it takes courage to release your book to the public. The question that scares writers is, “What will people think?”

Think about that for a minute.

Most aspiring writers don’t write with complete freedom because they are concerned with what just a few people will think. Mom, dad, spouse, a friend or an old teacher.

That’s bad. Don’t be enslaved to what others may think.

Be brave. Write from the core of your being even if you outrage them. They’ll get over it.

There’s a second part to this. What if many people—people you don’t know—think your writing is bad?

Seriously, will you be a cowardly writer because the reading public may dislike your work?

Of course not. You need to release your book courageously. Be brave and take both the bouquets and brickbats. Both happen when courageous people express themselves. Accept it.

Be vulnerable. Bravely share your inner-self. We all need to release our writing to the public to grow and learn and improve. It’s risky. Be brave.