Is Writing a Gift You Are Born With Or a Skill You Can Learn? 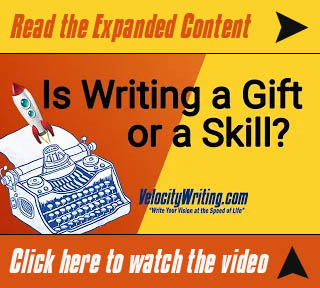 “You can either write, or you can’t. If you can’t write, no amount of training, study, and practice will make you able to write. If you can write, you have to.”

I gave a short answer in response to that video, but I think it deserves a longer look. By the way, if you have ideas for videos you’d like me to create, please contact me here.

So, where do you stand? Do you think the ability to write is a gift you are born with, or is it a skill anyone can learn?

In This Article hide
1 Is Writing a Gift?
1.1 The Story of Virginia Woolf
1.2 The Children of Sylvia Plath and Ted Hughes
2 Nurture, Not Nature: The Research
3 Is Writing a Gift of God?
4 Why You Can Learn to Write
5 You Can Achieve Mastery

Is Writing a Gift?

So, is it true that “You can either write or you can’t. If you can’t write, no amount of training, study, and practice will make you able to write.”

That presupposes that someone is a “born writer.” Is this possible?

I question that. If people were born with a gift for writing, it would be in the DNA. Certain families would have long chains of notable writers stretching back generations.

But we don’t see that. Sure, there are occasions when we see that a famous writer’s son or daughter also becomes a writer, but it’s not a generational thing. There are no writing dynasties.

I think such cases are nurture, not nature. When children grow up in a literary environment, they are more inclined to become writers.

The Story of Virginia Woolf

For example, Virginia Woolf’s father was Leslie Stephen, who was a noted author and historian. He had eight children, and only Virginia Woolf had notable literary output.

Woolf was incredibly close to her father. She likely gained her writing aspirations due to her love for him, not through his genes. If you want to learn about Woolf’s devotion to her father, read To the Lighthouse. He is portrayed as the fictional character of Mr. Ramsay.

By the way, The Modern Libary lists To the Lighthouse as number 15 on their list of 100 best Novels of the 20th century. It is worth reading.

The Children of Sylvia Plath and Ted Hughes

The same is true of Frieda Hughes. She was the daughter of American novelist and poet Sylvia Plath and Ted Hughes, and he was Poet Laureate of the United Kingdom from 1984 until he died in 1998.

Frieda is primarily known as an artist who has published self-illustrated children’s books. She also has several books of collected poetry. But she a deep emotional connection with her father, so nurture seems to be the connection. Her brother Nicholas Hughes became a marine biologist.

What about their parent’s linage? Sylvia Plath’s father was a university professor, and her mother taught shorthand at a secretarial college.

What about Ted Hughes’ side? Did he have a long line of literary luminaries in his family tree? No. His father was a carpenter, and his mother was a homemaker.

But Ted Hughes said something very telling about why he became a poet. He listened to the exploits of his father’s harrowing WWI experiences as a youngster and he began forming poetic images in his mind. In an interview with the UK Telegraph, he said, “My first six years shaped everything.”

There are very few cases where a parent or a child or grandchild was a gifted writer. There are no writing dynasties. I’m concluding that a writing gift is not in DNA.

Nurture, Not Nature: The Research

I am not alone when it comes to this conclusion. Howard Gardner wrote a book everyone should read called Creating Minds: An Anatomy of Creativity as Seen Through the Lives of Freud, Einstein, Picasso, Stravinsky, Eliot, Graham, and Gandhi.

Gardner came to several conclusions, but a major one was what he called. “The capital of childhood.” To oversimplify, that means that the younger a child develops a passion and is encouraged by significant others, the more likely they will have a creative breakthrough.

That research echoes Ted Hughes’ comment that “My first six years shaped everything.”

Other writers agree. In the Paris Review, E.M. Forster says his writing career’s genesis was his “literary childhood.” George Orwell wrote a famous essay, “Why I Write.” In it, he said that at the age of five or six, he knew that he would grow up to be a writer. And so it goes.

I have told this story a few times. I became a writer when I was about seven. I wrote a mystery novel called The Windy Night. Yes, it was what you’d expect from a seven-year-old.

But my mom encouraged my reading and writing. She used a typewriter to make my story into a little chapbook. It looked like a real paperback book, including a construction paper cover.

Later, in school, I gained a reputation as a writer from teachers and fellow students. I got lots of encouragement along the way. There were no writers in my heritage. It was nurture over nature.

Is Writing a Gift of God?

Is Writing a Gift of God? Many writers think they are a conduit for some outside voice, so let’s take a quick look at that.

Some would-be writers say, “I have no talent as a writer, but God wants me to write this book.”

I’ve touched on this in many articles and videos. I have confirmed that there is no muse, no god, no spirit good or bad, that will enable you to write anything worth reading.

The early Greeks put this idea into the human mind in western culture, and the Romans followed. Christians, Jews, and Muslims adopted it. Even Hindu people have a tradition of other-worldly spirits using people to write books.

But let me tell you, there are plenty of atheists out there who have written some great books. They were under no handicap by not being god-inspired.

If God gave a gift, it was the human brain. The trick is to get into the habit of using it.

Motivation and inspiration come when you expose your mind to a wide range of experiences. It’s true of all humans, regardless of religious affiliation or lack thereof.

So far, we have tried to demonstrate that no one is a born writer. It’s not a gift from God. It only seems like some have exceptional writing talent. But those who seem so blessed usually started writing in childhood and got encouragement along the way.

So, how can you become a writer today at your age?

Why You Can Learn to Write

I believe anyone can learn to write. Yes, it is best if you start early. That’s why I am a big advocate of encouraging young children to tell stories verbally and write them down when they are old enough.

Encourage a child to write and you will have done a good thing with your life.

You can learn to write because it is a craft, not an inborn gift. No one is a born furniture maker, for example. If you want to create beautiful furniture that people will want to buy, you must first have a desire. Then you enter an apprenticeship, where you learn to use the square, the chisel, and the jack plane.

You start by sweeping sawdust. When you have learned where the tools are, and the workflow, you graduate to another small project. Your supervisor will evaluate your work and see if you understood how tools act on wood. There are a thousand things to learn about wood, tools, design, and finish. Then, after years of building your skills under close supervision, you are ready to ready to make that finely crafted sideboard or dining room table and chairs.

Writing is a craft like that. If you care about writing, you don’t start by writing a novel or autobiography. You build your skills. Today, blog posts make an excellent training ground if some experienced writer is around to evaluate your work.

Evaluation by others is essential to learning a craft. The judgment of an apprentice-in-training carries little value when it comes to knowing what is good or bad. That applies equally to furniture making and writing.

The ability to write effectively comes through learning storytelling skills, learning how to communicate using words, reading widely, and, of course, the practice of continual writing.

You Can Achieve Mastery