J.K. Rowling has a story that all writer’s love. She was a British mom on welfare. Then, she wrote a book about a character named Harry Potter and after that a series of them. By 2017 she had a net worth of about $650 million, according to Forbes magazine. And that’s after giving away $150 million to charity.

How did she manage to do that? Let’s discover her writing secrets now.  She revealed many of them in articles and interviews, and here are the 5 that stand out.

If you think you might have heard them from other writers, don’t worry. She put all she heard together in ways that enhanced her creativity and made her rich and famous. Here is her advice as she distilled it.

In an interview, she said, “I always tell children who ask me for tips on being a writer to read as much as they possibly can. Jane Austen gave a young friend the same advice, so I’m in good company there.”

She also said, “You’ll go through a phase where you will imitate your favorite writers and that’s fine because that’s a learning experience too.”

Let me offer you some “out-of-the-box” thinking. I want to challenge you to read outside your range of interest. It’s easy to read books in your genre or by your favorite author. But you won’t stretch yourself unless you read outside your normal range of interest.  If you’re a guy, read a romance novel. If you’re a gal, read a history on the Battle of Waterloo. Most of us start moaning that something outside our normal interest is boring.  We need to change our mindset about reading other authors. We must ask ourselves, “What can I learn about writing from this author.”

So we read to enjoy, but as writers, we read to learn. More about that later.

Plan Your Book in Detail

There are two kinds of writers, so-called “Pansters” who write by the seat of their pants. They never know what is going to pop into their head next. These people often suffer from alleged “Writer’s Block” because nothing comes to mind.

Then, there are people who outline. J.K. Rowling is an outliner. Lore has it that she outlined, in deep detail, all seven of the Harry Potter books before she wrote the first one.

She even wrote the backstories of characters that she later cut. Since she had a plan, it was far easier for her to execute it.

As I often tell my mentoring clients, an outline should be considered a road map. You can see your starting and ending points, and your stops along the way. You are welcome to take side trips along the way if you get the bug to do so. An outline is not a rigid plan you must follow. It is a path to joyously follow with the knowledge that if you decide to go rogue you can always get back on track later if you wish.

There is no mistaking that Rowling did a brilliant job in creating her characters. You love them or hate them—there is seldom a middle ground.

Her characters are so embedded in the minds of her readers, they think of them as real people. How did she do that?

J.K. Rowling had the ability to create characters that any boy or girl (or the child in any adult) could identify with. They each have their own normal hopes and fears. We connected to them on a human level. But then she added spice. What made Harry Potter different and unforgettable? It was that lightning bolt scar on his forehead. It made him unique, and it also alerted readers to the idea that exciting things were in store for them. That one bit of magic will change the rather normal character into an extraordinary one.

There are many examples of this in her writing. The principle is that you can create fascinating characters by giving them one unique characteristic that you can build on. You don’t need to write about height, eye and hair color, clothing and all that at the start.  Let these kinds of details emerge as your story unfolds.  However, use the Rowling technique to immediately rivet attention, and create a reader-character bond by highlighting a unique characteristic. It should be interesting and unusual for each character and act as a launchpad to plot elements that emerge later.

By the way, her fascinating characters are the most important element that made Harry Potter movies and theme park attractions possible. Characters make the story. 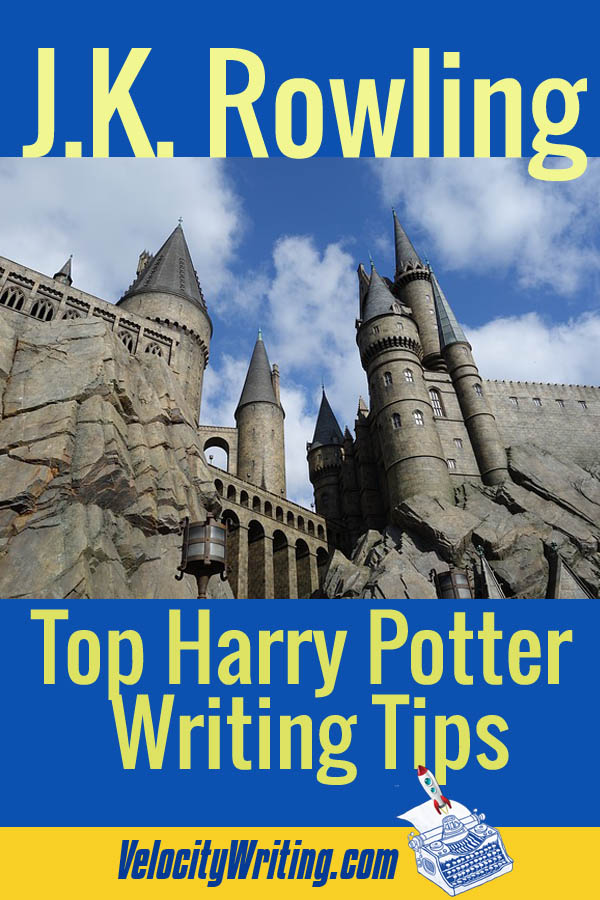 There are two parts to this. First, you want constant conflict. There is conflict in every situation and the resolution of that conflict leads to a new conflict. There may be minor conflict resolutions along the way, and a big one at the end of each book, but conflict drives the story forward.

The second part of this is in strategic planning and the pacing of the story. She never releases character traits or plot developments in a flood. They ooze out.

Readers love that and it keeps them “on the edge” in pleasing ways.

Even though she had a detailed outlining process and knew all the traits of her characters and every scene in which they would perform, she still understood the importance of honing her words. Again, lore has it that she rewrote the first chapter of Harry Potter and the Sorcerer’s Stone 15 times.

Many writers think their first draft is good enough. Not true, according to writers who have mastered their craft. Multiple drafts make better books.

Let me pause here to clarify something for newer writers. That is, the goal is to write the first draft as quickly as possible without second-guessing yourself as you write. In your first draft, you keep moving forward and you don’t stop or look back. Once the first draft of your entire book is complete, you go back and do revisions. You add or delete parts of your first draft. When you are done, you have your second draft. This process is called revision or rewriting.

Once you have your best and final draft, you send it off to a competent copy editor who will offer suggestions for adding clarity to what you have written. A copy editor doesn’t just clean up spelling and grammar. He or she will help you create a better final draft. By the way, a proofreader is not an editor.  Proofreading is not  a “final edit.” It is a mechanical means of checking proofs (thus the name) to make sure no new errors were introduced in the book composition (typesetting) process. Proofreaders make marks on a manuscript and should never be empowered to make editorial changes.

J.K. Rowling understood the power of revision.  She always got her first draft completed, and then made changes, sometimes deep changes to it, in each ensuing draft. The first draft was like clay in her hands and she crafted that into the final story.

The J.K. Rowling School of Writing

As you probably know, I teach online writing courses. But, if you want to take a master course in fiction writing, I suggest you study one of Rowling’s Harry Potter novels.

You can get valuable training by doing this.