Leonard started writing Western novels and several of his novels were made into movies. Most famous was “Hombre” starring Paul Newman, and then “3:10 to Yuma” which was filmed twice. The first time in 1957 starring Glenn Ford, and again in 2007 starring Russell Crowe.

Leonard moved on to crime stories. He wrote the novels that became “Get Shorty” and “Be Cool,” both starring John Travolta. He also wrote “Jackie Brown,” the movie was directed by Quentin Tarantino.

He also supplied the storyline behind the TV show “Justified,” among many, many others.

Why did so many of his stories and novels become movies? Because he created great characters and had a real gift for writing dialogue. His rules for writing are important.

The best-known opening for a mystery is, “It was a dark and stormy night….” That’s become a literary joke and the mark of an amateur writer. Actually, English novelist Edward Buehler Lytton used it in 1830 to open a novel and it has been mocked ever since. Leonard thought it was best to forget the weather because readers want to connect with characters. The faster you introduce people, the better.

Leonard said avoid prologues. He thought prologues were unnecessary for fiction writers. They are usually back story, something that should be integrated nicely elsewhere in the novel.

I remember when my friend, the late writer Michael Hemmings saved me from a fate worse than death. Mike was prolific everything from pulp fiction to academic books about Gordon Leash, William T. Vollmann, and Raymond Carver. We read early drafts of each other’s work. I was among the first to see his fascinating ethnography, Zona Norte. He read and offered feedback on my novel, Jet Pink. I had a prologue in Jet Pink, and Mike advised me strongly to cut it. I wrote the prologue sitting in the Luxembourg Gardens in Paris and it was filled with all the requisite literary flourishes. Mike saved me by urging me to cut it. Elmore Leonard had it right when he said to avoid prologues. 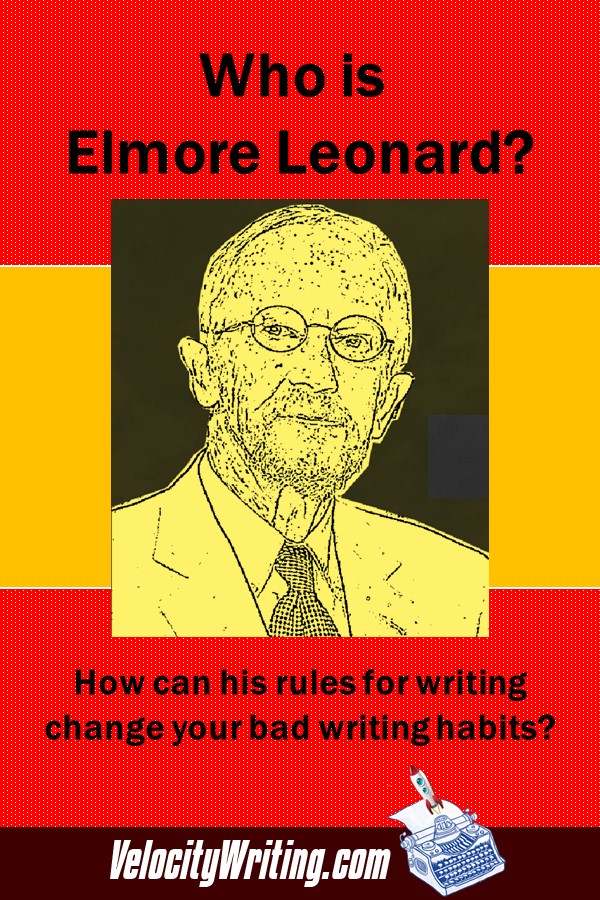 Leonard said never use a verb other than “said” to carry dialogue. If you read a lot of student writing as I do, you’ll see that most students start out by using “said,” but just can’t leave well enough alone. Let’s look at a lighthearted example:

Lady Barrington looked at the engagement ring Reginald placed on her finger. “That’s a small diamond,” she said.

But novice writers don’t trust the power of the word said and they think they can improve upon it.

Lady Barrington looked at the engagement ring Reginald placed on her finger. “That’s a small diamond,” she asseverated.

Don’t do that. You don’t need variety. Stick with “said.” If you have a long unbroken conversation, you can use he or she said in the beginning, and if the writing is good you don’t need to repeat “said” at every utterance. “Said” is the word you want to almost always use to give rhythm to your dialogue.

Rule Four—Don’t use an adverb to modify “said”

Leonard said, “Never use an adverb to modify the verb ‘said.'” This idea piggybacks on the previous rule. Many writers can’t put force in the statement itself, so they think they’re giving their plain prose a turbocharge by putting an adverb rocket on the tail of the statement. Example:

Lady Barrington looked at the engagement ring Reginald placed on her finger. “That’s a small diamond,” she astonishingly asseverated.

Bad. Purge as many adverbs as you can throughout your writing, but be sure to banish them all in dialogue.

Leonard said keep your exclamation points under control. In my writer mentoring, I see all levels of writing skills. Let me tell you, there is a plague among new writers and it’s killing them. The plague is the use of the exclamation point.  I recently edited the client book that had 1,273 exclamation points. I pared it down to three. Those three could have been excised too. but I wanted to give the author the benefit of the doubt. Leonard put it this way. He said, “You are allowed no more than two or three per 100,000 words of prose.” He was being both generous and humorous when he said that. Find words to express exclamatory thoughts and actions. Don’t use exclamation points.

Leonard said never use the words “suddenly” or “all hell broke loose.” I love this one. Adverbs and clichés are always a bad mix. You might write using such terms in your first draft, but you want to flesh out what you really meant in your second draft. You want to find real words to express yourself, not fall back on empty terms like this. Rather than relying on a word like “suddenly,” you want to set the scene:

Reginald walked down the dark alley. He heard a noise, turned, and saw the flash of a knife. He fell, mortally wounded. He looked up and saw Lady Barrington standing over him with a vindictive smile on her face.

As you can tell, all hell broke loose rather suddenly. But we didn’t use the cliche or the adverb. We provided an alternate visual image. Avoid adverbs and clichés either separately or together.

Leonard said, “Use regional dialect (patois) sparingly.” Writing in dialect sometimes identifies and carries your character, but there is a twofold problem with using it. First, you must have an ear for writing it. Most writers can’t capture the Irish lilt, Mexican Spanglish, or ghetto talk. If you can do it, great. But as Leonard says, use it sparingly. The second aspect is that many readers don’t like to read dialect. They have to re-create what you’ve written in their own minds and they may not be good at dialect themselves. So again, Leonard’s rule is a good one. Use dialect sparingly.

Leonard said, “Avoid detailed descriptions of characters.” This rule, and the one that follows reinforces Leonard’s cinematic approach to writing. He knows that readers will be projecting the story on the screen that’s in their own minds. So, he’s saying that writers should give enough details to give shape to characters, but let readers fill in the details in the theater of their minds. He is saying something else too. That is, you don’t dump all aspects of the character into a few paragraphs. You never want to describe height weight clothing features and so forth all at one time, you let the physical and psychological details of the character leak out over time in the context of your story. Pace your descriptions don’t dump them all at once on your readers.

Rule Ten—Know what to leave out

Elmore Leonard always claimed he had 10 rules but it was 10+ one he said the 11th rule summed up the other 10 but it really has a life of its own. He said. “If it sounds like writing, I rewrite it.”

That’s the genius of Leonard’s writing. He was focused entirely on the mental images readers were creating in their minds, and he didn’t want the writing to get in the way.

Here’s Leonard’s full statement. He said, “If proper usage gets in the way, it may have to go. I can’t allow what we learned in English composition to disrupt the sound and rhythm of the narrative.” He explained that saying, “It’s my attempt to remain invisible and not distract the reader from the story with obvious writing.” In my view, that’s the best advice you’ll ever get about writing.